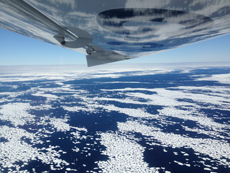 Jon set off in May of 2013 and, as he was planning to go via the northern route, he had to prepare the aeroplane to cope with the cold weather. He had G-CGIZ serviced and modified slightly to cope with the conditions. It is worth noting though that the CTSW microlight is definitely not suited to Arctic flight.

Inside the aircraft Jon packed a 2 man raft, an immersion suit, a Garmin 795 to go with his existing 496, an emergency locator beacon and packets and packets of Kendal Mint Cake. 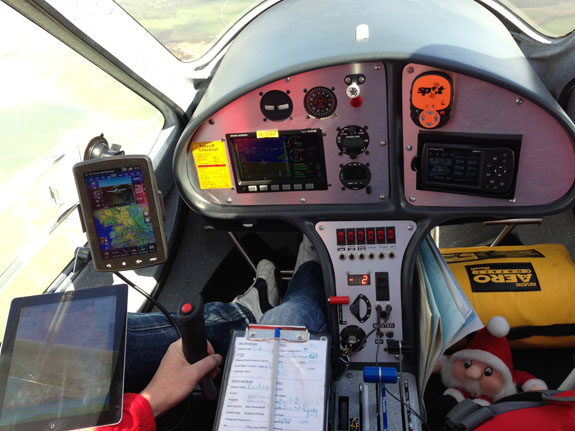 His entry in the log book in the tower stood out alongside the usual ‘Sleaps, Caernarfons and Welshpools’. I’m sure the book has rarely seen an entry such as, ‘Canada, via Wick’!
Jon claims that he hates flying through fronts but on that morning of May 24th it was windy and miserable and there was a front across his path to the north. No sensible person was flying but Jon decided to go, thinking that if he gave up on that day, he might never try again. Almost as a taster for the rest of his flight Jon had a bit of a scare over the Lake District with an ‘under or over’ decision to make. He chose to fly beneath the cloud but that decision took him a little too low for comfort. He experienced a little ice building up on the wing; an experience that was to be repeated quite often over the next few weeks. 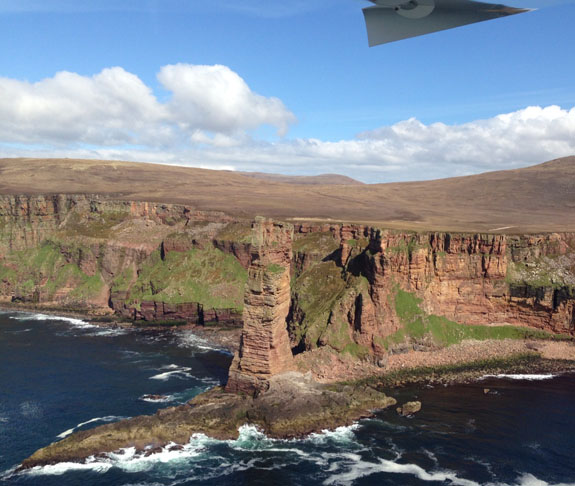 A view early in the trip

Jon’s first stop was at Wick in the far north of Scotland to refuel and check the met before continuing to the Faroe Islands. Even though he’d been flying for 7 or 8 hours by then Jon decided to crack on and, after a short stop in the Faroes, flew to Iceland. He was diverted by ATC to Akureyri in the north east of the country due to bad weather at Reykjavik. The weather at Akureyri was, as it turned out, just as bad as his planned destination and he experienced gusting winds and low visibility that pushed his flying skills to the limit. I wasn’t really surprised to hear that Jon had begun to feel just how vulnerable he was flying his very light weight microlight aircraft in circumstances that would test much bigger aircraft. 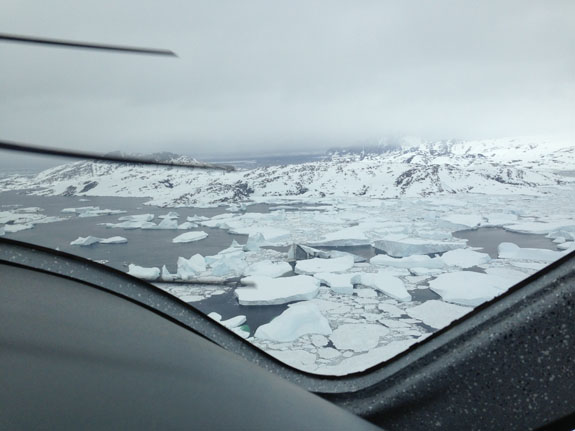 Desperate times over the ice floes

Not for the first, or indeed the last, time on his epic flight some of the electronic equipment inside the aircraft failed due to the cold and he realised that he had few options to land safely if there was a problem with the engine or airframe.
Another recurring theme for the flight was the lack of sleep that Jon had to cope with. His first night was in a hostel in the local town near the airport where partying locals and the midnight sun conspired to deprive him of much needed sleep. I can’t imagine how he managed, as I couldn’t cope without a good night’s kip, but Jon decided to press on to Greenland. 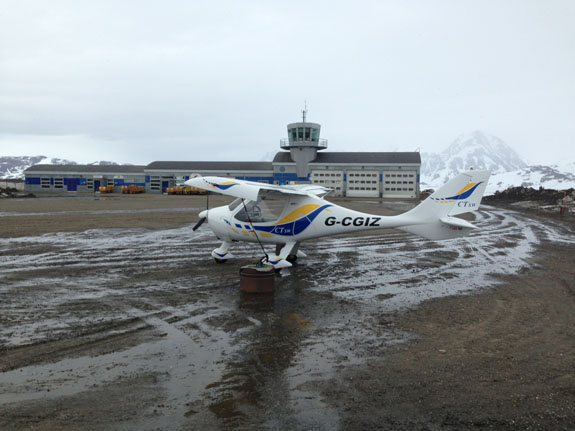 He had decided not to put his immersion suit on but just to put his legs in the lower half and tie the rest around his waist. These things are extremely uncomfortable and Jon opted for comfort over security but the reality of trying to put the suit on fully during an emergency soon dawned on him as he was forced down to less than 500′ over the icy sea on the flight to Greenland.
On this leg from Iceland to Greenland Jon at first tried to fly at up to 13000′ but then his Dynon stopped working correctly, indicating that he was flying at 400kts and was in a permanent banking turn. He descended through cloud to avoid icing in the higher levels and then water in the pitot deprived him of an airspeed reading. He finished the last leg of the flight in very low vis under cloud at 700′. Despite all of this and a warning of running water and snow banks on either side of the gravel runway at Kulusuk, Jon managed to put his aircraft down after a flight of just over 6 hours. 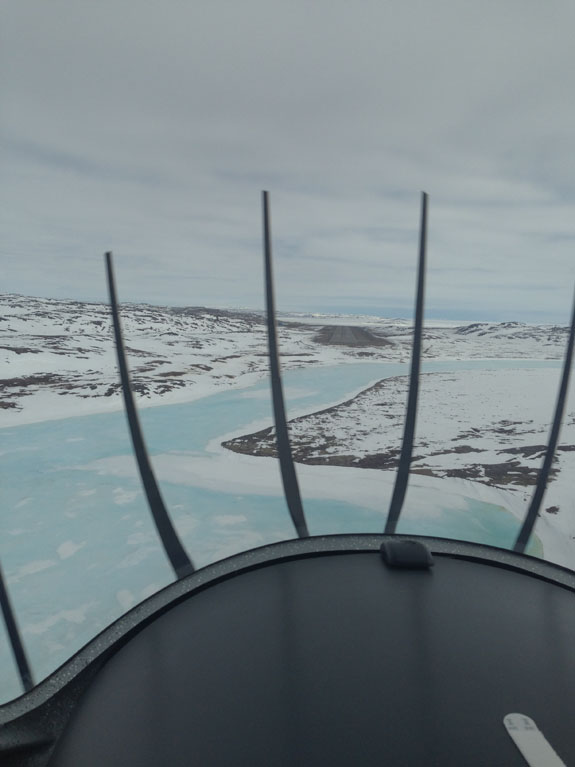 Feeling a sense of relief Jon started chatting to a young ramp hand about his aircraft. Having listed his plane on all of his paperwork so far as 450kg., Jon felt no worries about calling the CT a ‘microlight’. That proved to be the start of a bureaucratic nightmare that was to last nearly a week. It transpires that microlights aren’t allowed to fly in Greenland. Their airspace is governed by the Danish CAA and they weren’t willing to listen to Jon’s arguments that there has been a long list of microlights that have flown through Greenland on their way around the world. It didn’t look good for Jon at this point and he contemplated shipping G-CGIZ back to the UK. However, after many days of negotiation which included Jon increasing the insurance level for the recovery of his crashed aircraft, carrying survival gear in the cockpit and getting friends to write letters to the Danes saying what a fine pilot he was, he was finally allowed to travel on. 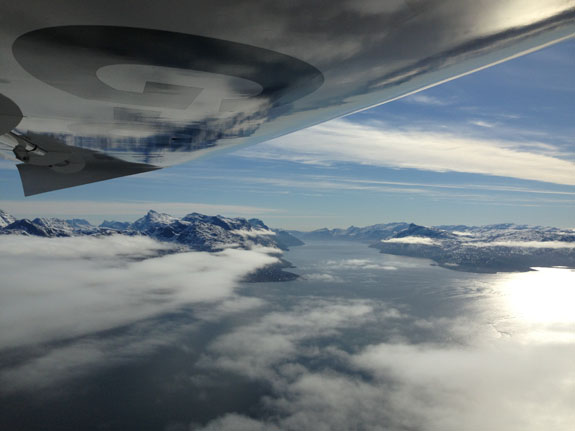 Beautiful and yet testing

As part of the agreement with the Danish authorities, Jon was prevented from flying direct over the icy wastes in the centre of the country. The Danes didn’t like the idea of him flying on Mogas at over 12,000ft ignoring the fact that he was in fact running on Avgas so he was forced to follow the coast around the south of Greenland.
Despite the forecast being acceptable for his flight on to the west coast, Jon was reminded again that the forecast is very much guesswork in the North Atlantic. On this next leg he found himself flying along at 100-200ft above the sea, surrounded by icebergs. He described the flight as one of the most intense moments of his life as rain battered his windscreen, ice began to build up on the wing and his instruments began to fail. At a point several hours from he nearest civilisation and feeling very scared and alone Jon saw a fishing boat. He began to think that it might be best to just try and get his immersion suit on and to ditch near the boat so that the nightmare might be over. Luckily for Jon he managed to pull himself back together and press on.
Arriving at Narsarsuaq Jon’s avionics again started to play up but he landed safely. Only on the return trip did a helicopter pilot point out the electricity cables which span the fjord, that Jon had flown down earlier, but which aren’t marked on any charts. 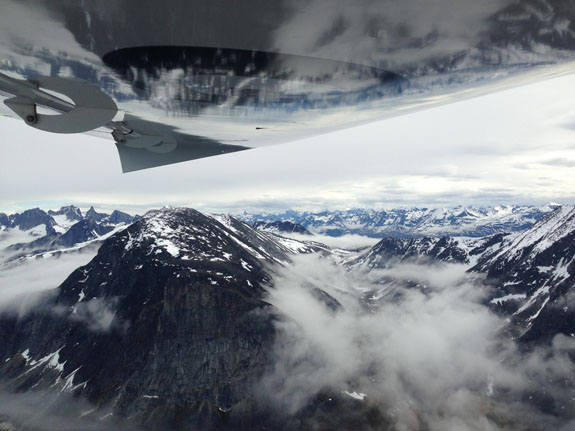 Not many options for a forced landing

From here, on the very southern tip of Greenland, Jon flew on up to Nuuk, which would be his jumping off point for Canada. From Nuuk Jon headed west across the freezing void towards Iqualuit. Once again Jon highlighted how the isolation and lack of radio contact plays on the mind. Having reached Canadian airspace he overcame the temptation to turn back and he pressed on under lowering cloud to finally reach his goal of Canada. Prior to landing, and even though he was extremely tired, he delayed his landing to allow a couple of 737s in to land in front of him but that’s just the sort of chap he is. He was met on the ramp at Iqualuit by a couple of burly security guards but as so often on the trip, they were more interested in seeing the tiny microlight aircraft and say hello to the intrepid pilot.
The trip back to the UK was more of the same. The weather forecasts en-route were fairly inaccurate for most of the journey due to the changeable nature of the North Atlantic. Every attempt at sleep was thwarted by many factors including early rising fishermen and amorous folk in adjoining rooms.
The photos, as you’ll see, look like postcards and I asked Jon whether he was ever just able to sit back and enjoy the view. Unfortunately, I don’t think Jon enjoyed a single minute of the whole trip. In fact I think he still gets a chill when he looks at the photos on his iPad. Jon recounts an episode during a flight on the return trip when he was down to 50′ above the waves, rain was pouring across his windscreen and he was feeling cold and exhausted. He says that he almost got to the point where he thought it would be a relief to just push forward on the stick and it would all be over. Such is his strength of character he was able to put these thoughts to one side and press on.

Many will criticise him for taking unnecessary risk but that’s entirely down to him. He knows that he was lucky to survive but that’s what risk taking is all about isn’t it? The aircraft, his CTSW microlight, has shown just how good the technology is in light aviation nowadays. The only issue was a slow puncture and an oil leak that wasn’t very serious. The avionics aren’t designed for such extreme environments so I guess we can’t be surprised at how they performed. The Spot Tracker that Jon was using had the habit of freezing at several points along his journey so the ATC folks thought that he’d died on more than one occasion. 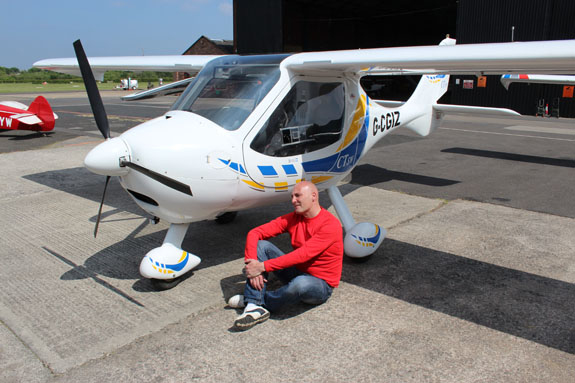 I asked Jon what exactly drove him to risk his life to achieve his flying goals. He says that he doesn’t want to get old and to have to admit that he’d not done lots of things in life and it’s fair to say that he is cramming the experiences in. He’d done the trip to impress his father but, sad to say, his father died shortly after Jon’s return. This has only reinforced Jon’s view that we only have one life. The flight to Canada and back was his Everest, says Jon. The round the world trip may now be on the back burner but who knows.

Jon’s been raising money for the Clatterbridge Cancer Charity over the last few years and has reached a very respectable figure of well over £10,000. Jon is still raising money for this worthy cause and will be writing an e-book about the adventure to hopefully raise even more. Please give generously.
https://www.justgiving.com/Jon-Hilton