I started out by asking Brian about his early flying career. Smitten with the flying bug from an early age he applied to British Airways for their cadet pilot training programme and although he got through to the interview stage he didn’t get the scholarship award.
Having gone off to university to start a career outside of aviation he came back to flying when he’d saved enough money to start flight training which he did at Multiflight, Leeds.
After a few hours flying at Leeds Bradford he was invited to go flying over at Caernarfon in North Wales by a colleague and he was so taken with the place that he decided to do the remainder of his PPL training there.
Brian managed to complete his PPL after a year’s training at Caernarfon and it was whilst he was there that he got interested in flying biz-jets. 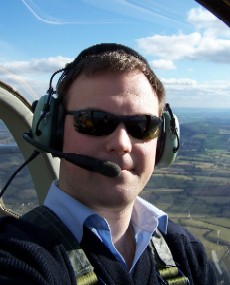 After his PPL, Brian moved jobs and found it convenient to continue his flying based at Sherburn Airfield near York. At Sherburn he did his night rating and went on to build 100 hours of flight time with a view to progressing to doing the CPL licence.
Brian went on to do his CPL ground school training with CATS and the actual CPL flight training element with Advanced Flight Training at Sherburn.
AFT have access to several aircraft at Sherburn, using a PA-28 and a Grumman Cougar GA7 twin engined aircraft for twin ratings. As Brian wanted to get a CPL with twin rating he spent many a happy hour flying the Cougar.

He’s committed to passing on his knowledge of flying to others so Brian has begun the Flying Instructor course at AFT but he’d like to eventually split his time between flight instruction and flying commercially. He’s interested in such commercial flying operations as parachute dropping, flying biz-jets or maybe flying for fisheries patrols or the Ordnance Survey. Not a bad life for an aviation nut eh?

In addition to his current ratings and licences, which now includes the IMC, Brian is intending to move on to do his Instrument Rating with AFT. Incidentally, he recommends that anyone who’s interested in flying safely should get the IMC rating before its potential demise when EASA rules take effect in a few years’ time. 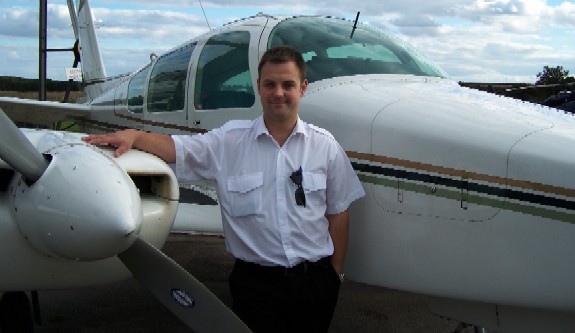 As per usual in these podcasts we ended up discussing memorable flights that we’d completed. Brian’s CPL cross country flights included a couple of long distance flights one of which took him up to Scotland. That was one of his most memorable aviation experiences taking him from Caernarfon to Islay, Oban, Inverness via the Great Glen, Stornoway, back to Oban, Prestwick and then back to Caernarfon via Barton – I know it well.

I asked Brian why he had chosen CATS for his ground school studies.
He said that he liked their flexible approach to the completion of your studies and exams enabling candidates to fit the course in around your work life. He also liked the fact that they split their studies into 3 parts making the exam schedule a bit easier to cope with.
Brian was particularly impressed with CATS, especially with how they made some of the more taxing subjects, like air law, easier to cope with. 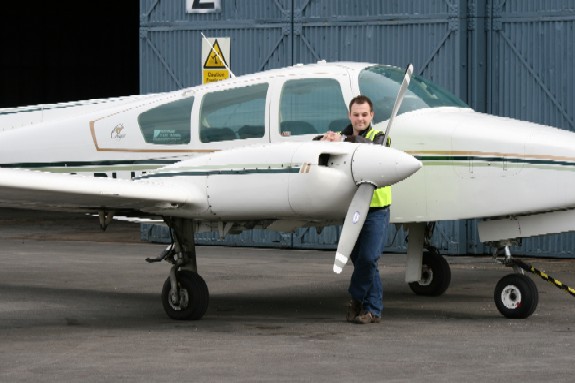 Brian with the Cougar at Sherburn

If you’ve never flown into Sherburn, it’s a great little airfield and well worth a visit, even if, like me today, you have to come by road. Sherburn Aero Club’s web site can be found at:
www.sherburn-aero-club.org.uk

From what Brian tells me, Advanced Flight Training is an extremely professional flight training organization. If you’d like more info about them have a look at their web site:
www.advancedflighttraining.co.uk

One thought on “Episode 40 – Brian Cattle, from PPL to FI via CPL”