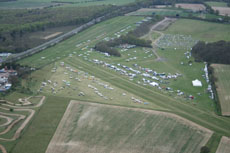 For today’s episode of Flying Podcast we’re looking at the world of microlights and light sport aircraft here in the UK and where better to do that than at the Popham Microlight Trade Fair held, not surprisingly, at Popham airfield in Hampshire. In this episode you’ll be hearing from most of the main manufacturers and importers of light sport aircraft in the UK.

After a rainy and blustery start the show’s weather improved. So much so that the weather on Sunday was near perfect for a flying show and there were hundreds of visitors by air and by road.

Gerry Speich of Rotorsport was displaying the new Cavalon, 2 seat gyroplane. Fully approved on the Thursday before the show, Rotorsport, the UK agents for the machine, had 2 aircraft on their stand, one for display and one for taking potential customers flying. Together with Magni Gyro, the ‘gyro village’ always attracts a crowd and today was no exception. 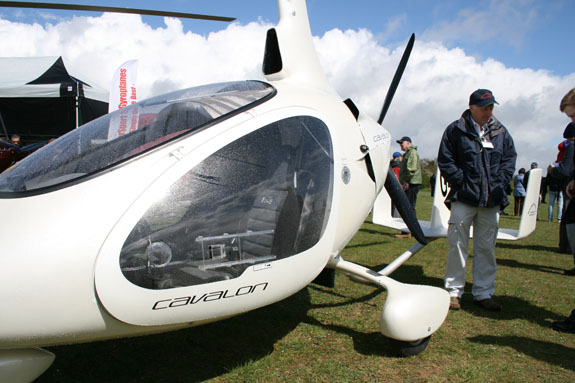 Gerry Speich of Rotorsport with Cavalon

Gerry was very upbeat about the Cavalon stating that ‘no other 2 seat side by side gyro in the world that can do what this aircraft can do. It’s very comfortable, it’s heated, it’s got excellent visibility and it’s CAA approved’. With a huge weather window in which gyros can fly, Gerry was expecting 30-40 of his customers to fly in despite the blustery conditions. Despite the slow economy and the poor exchange rate Gerry says that the future for gyroplanes in the UK is looking bright.

John Riley of AirBikeUK was showing his single seat deregulated AirBike. Having changed the engine mount John says that he’s cured many of the vibration issues that he had with the single-cylinder engined aircraft during development and that the aircraft kit is now ready for market. John’s aim was to get a kit on to the market for under £10,000 and with the airframe kit itself selling for around £6,000 he isn’t far off his target. Designed by Wayne Ison (designer of the Minimax) in the US, John has registered his demonstrator G-ISON in honour of the aircraft’s now 84 year old originator. 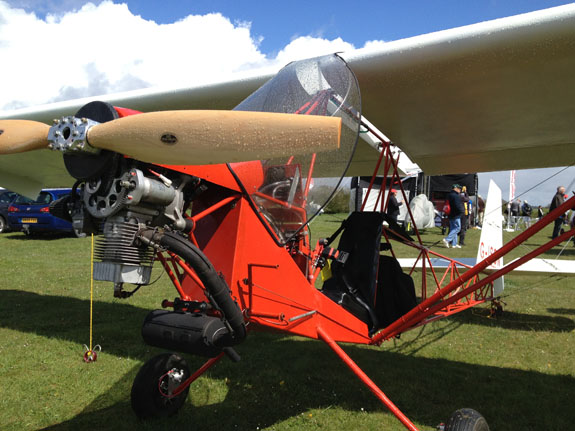 Coming in at under 115kg the AirBike falls into the SSDR category in the UK and so doesn’t need a permit to fly. The aircraft certainly looks like fun and if you fancy a motorbike for the skies with plenty of fresh air then this is the aircraft for you.

The, by now familiar, EIII Fokker Eindecker replica with MZ 201 45HP engine was on show and Robin Morton of Grass Strip Aviation says that of the 7 kits that have been sold, 4 are now flying. With electric start, brakes and in-flight trim Robin says that it makes a very useful aircraft that’s extremely gentle to fly. 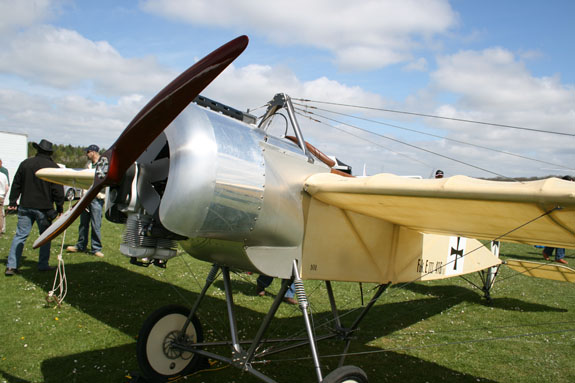 He also says that they are well on their way to having half a squadron of the sub 115kg category aircraft in the air. One commercial airline pilot customer with his own airstrip has done over 40 hours on the aircraft and claims to have had “the best fun with his trousers on”.
The company will be working on developing a Briggs & Stratton based, 4 stroke, V-twin engine range starting with a 30HP version that they will use in their next aircraft development, the Dream Demoiselle.

Sprite Aviation was showing the original demonstrator version of the Nando Groppo Trail LSA aircraft. Fully approved in October of 2012, they have now sold 17 kits. Early customers went for the Rotax 912 engine but, according to Graham, more recent customers have been choosing the 95HP Sauer engine. ‘It’s cheaper to buy, parts are cheaper and many of the maintenance items can be sourced from Halfords’, he explained.
The company has been working on a microlight version of the Trail but they are missing the target weight a few kilos and so they may abandon the project. 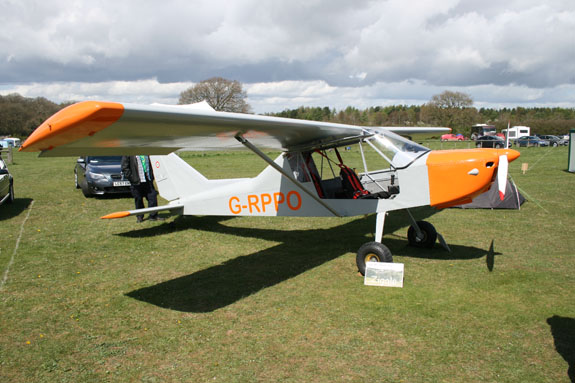 They have had a lot of enquiries for a soon to be released side-by-side version of the Trail coming from Italy which will be 6kg lighter than the tandem version and so they could work on a microlight version of that aircraft later this year. Graham Smith says that this new aircraft may be a nose-wheel model rather than the bush aircraft, tail-dragger style of the current Trail.
I’d noticed the Zigolo at Friedrichshaven and Sprite is the agent for this too. Graham was very enthusiastic about the quality of the motor glider kit based on the Goat and at just £4456+VAT for the airframe kit he says that it’s a sensible SSDR aircraft ‘for paramotor money’.

I’ve seen the Sherwood Ranger before at the Flying Show and it certainly is an eye-catcher. In bright yellow with red prop the lovely microlight bi-plane certainly attracts a crowd. The company now has 4 aircraft in the range. In addition to the 450kg microlight version there’s a 472.5kg version for the German market with BRS and then there’s 2 Cat A versions including an aerobatic version. 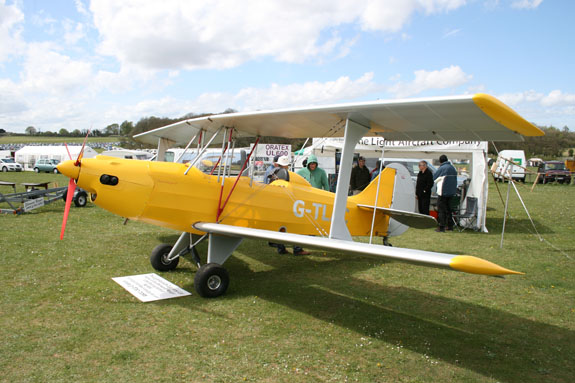 Paul tells me that they are also experimenting with the D-Motor in the XP, Cat A version and being very light would probably work very well in the microlight ST.

Wessex supplies the X-Air range of aircraft in the UK and they had the Hawk, 3-axis microlight version on display. In this case the engine fitted was also the D-Motor which, according to Gordon, is much lighter than competing engines and so increases useful load. 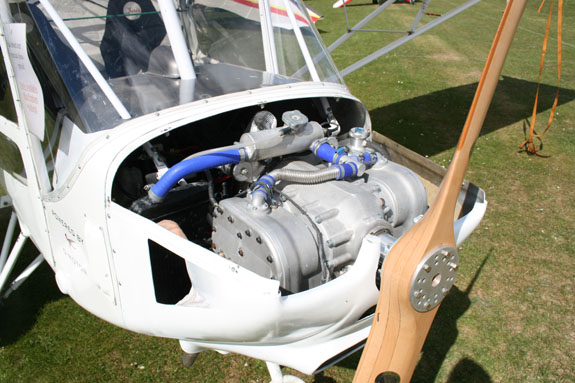 Notably the 90HP model comes in at 57kgs with oil, coolant and exhaust, which is 18kgs less than the Rotax 912. It’s a direct drive, water cooled, fuel injected, side valve engine and so far has cost its Belgian parent company 2m Euros in development costs.
Wessex Light Aircraft are UK agents for the D-Motor and they are looking forward to the launch of a 6 cylinder, 130HP motor in late 2014.

P&M have been busy load testing a new PulsR composite moulding and he is happy with progress so far. Because you would end up with a mountain of sandbags to do the load tests Bill explained that they now use a whiffletree which I believe is a series of cables and beams that divide up the load. 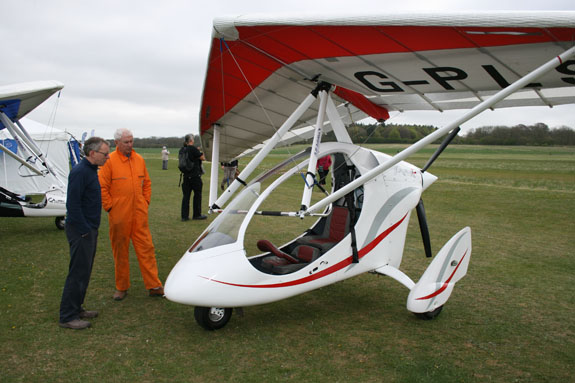 I asked Bill how the PulsR had been received in the marketplace and he said that interest was a little subdued. Many people were asking ‘what’s the point’ said Bill but ‘once people try it, they get it’, adding that the faired in cockpit means you can fly without a face visor and your head isn’t constantly buffeted. The PulsR comes with the ubiquitous Rotax 912 but Bill is constantly looking at alternatives including the D-Motor. He’s impressed with the D-Motor but is yet to be convinced of its appropriateness for the PulsR due to potential noise levels.
P&M are also working with the Fly2Pole team to adapt the PulsRs for their flight to the pole. The enclosed engine makes it easier to pre-heat prior to start in the cold conditions and they are even thinking about the addition of heaters to the aircraft to at least keep feet warm en-route. Whilst concentrating on the PulsR Bill is conscious that they don’t loose sight of the ‘low-cost aviation goal’. He thinks that technology developed to create the PulsR trike could be rolled out to produce lower end models in future.
Bill also identified a gap in P&M’s product offering and thinks they need a simple 3-axis model for the training market so watch this space too.
At home Bill is building a Jodel with a Rotax 912S powerplant and P&M are making the cowling for the Jodel DR1050 conversion. Bill is hoping to get the Jodel into the air later this year.
He’s also very much involved in human powered flight and he’ll be down at Sywell between 19&28th July for a human powered flying competition. Bill is looking forward to human powered flight being an Olympic sport. Apparently the pilot needs 3 Watts/kg output to be able to fly an aircraft under his own power!

If you want a lesson in what is ailing the UK light aviation market you could do no better than to talk to Malcolm Stewart of Red-Air. Malcolm entertained me for a good while with his story of getting a new aircraft approved for use in the UK. Luckily he backed a winner with the C42 and his hard work and frustration paid off with 22 sales in the past 9 months but it does make one think that there is much to sort if light aviation is to flourish in this country (witness the range of new models on show at Friedrichshaven). 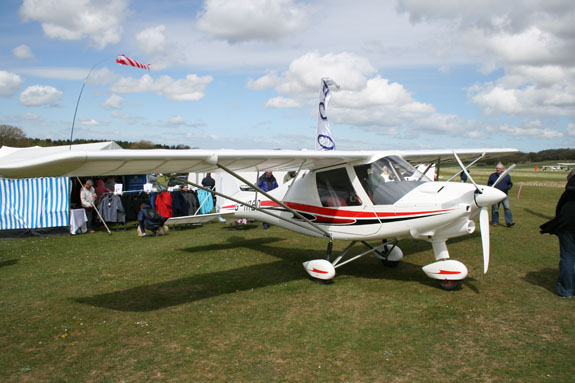 Malcolm had the C42B model on show and he explained how, rather than try to get it approved as an entirely new model, he opted for a cunning list of mods in order to get it past the CAA. Sadly this isn’t going to work for the likes of the C52 which may never appear here.

Flylight are 99% the way towards the approval of the Nynja VLA spec aircraft. The LS, as it will be called, will be a 500kg VLA version of the well proven SkyRanger Nynja. Also notable is that it will be the first BMAA VLA permitted aircraft. 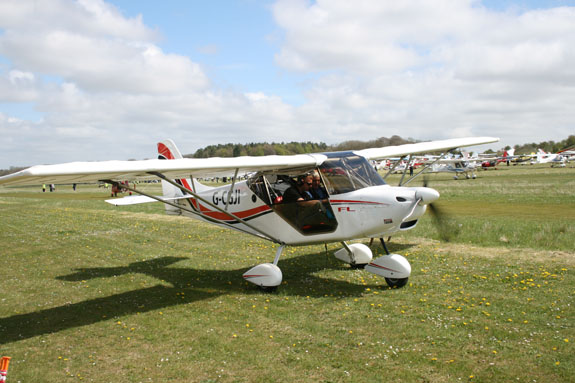 Paul Dewhurst told me that the new version can actually be registered as a microlight or a VLA and re-registered if you, or another owner, wanted to change category in future. Also on the Flylight stand at Popham were a whole complement of Dragons with varying wings from the Fox right up to the Combat, high performance wing. There were also versions with the Chaser wing, more suited to touring. In all Paul thinks they have a total of 24 options for combining trike, engine and wing.

One chap that I really wanted to meet was Gordon Clephane. Gordon was one of the early microlighters in the UK and he actually built a Weedhopper here at Popham in 1980. Renting a workshop without power or water at the airfield for £1 a week, Gordon built the aircraft and then proceeded to teach himself to fly with the flying manual strapped to his knee. Luckily, and maybe surprisingly, such aviators are around to tell us their story. He was around when several aviators including Gerry Breen, Steve Hunt and Pete Lovegrove met up and decided to form the BMAA – the British Minimum Aircraft Association as it was then known. 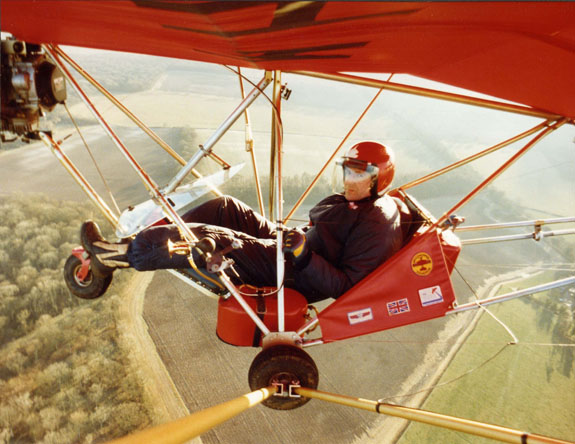 Gordon is now looking for some other aircraft to fly as his Weedhopper is now a permanent fixture in his shed. Suggestions welcome!

The current BMAA’s tent was very busy all weekend with people enjoying the flex-wing simulator challenge that they had set up inside. There was also a steady stream of potential members with several actually signing up and lots more showing an interest in learning to fly microlights.

Great to see a few members of the Fly2Pole, Flying for Freedom team visiting
the BMAA tent too. The BMAA are their newest sponsor of the group who are teaching injured ex-servicemen and women to fly microlights and are also aiming to fly several PulsRs to the South Pole – see Episode 63. 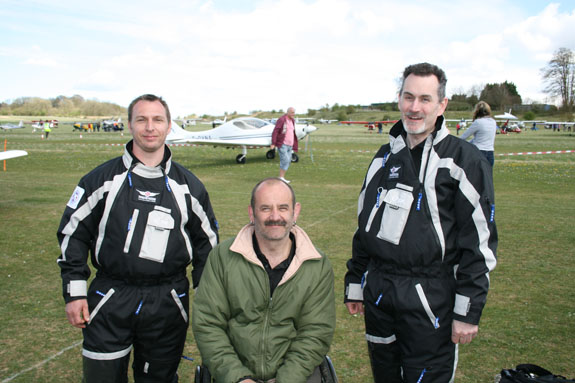 Cpl. Alan Robinson, the first qualified pilot of the group, John Laity, the projects joint founder and Dave Sykes were all at Popham.