The company was started in 1969 by Mike Collet. Initially called General Aviation Services; they were based in Jersey, then Sherburn and then Doncaster.
In 1974 Air Atlantique started with 2 Dakotas arriving in ’76 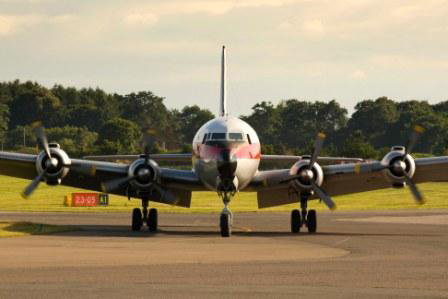 Eventually they had 9 Dakotas and also brought in DC-6s for freight carrying
As his companies prospered, Mike collected classic aircraft along the way.
When Mike retired he sold off his companies leaving what Steve refers to as ‘the boss’s train set’.
Air Atlantique Classic Flight, as they are now known, are currently based at Coventry Airport and that’s where Steve thinks they’ll stay.
As I mentioned earlier, Classic Flight have recently opened Airbase. Steve describes Airbase as a safari park for classic aeroplanes. People can visit, get up close to the aircraft and sometimes even get inside.

They do photographic events, from time to time, which enable people to come and take pictures of the aircraft. The event that Steve mentioned takes place at night and gives photgraphers that chance to take photos of the aircraft under floodlights.

Their flying season tends to be from Easter to October. Steve says that classic old taildraggers don’t do too well in winter’s windy conditions.

Classic Flight don’t just offer the pleasure flights from Coventry. They do take several of the aircraft on tour during the summer so people that are interested in taking a flight can do so at a more local aircraft.
Their air operators certificate only allow them to offer what’s known as A to A flights. That means you have to return to the airfield that you took off from rather than ‘land aways’ at other airports.

I was interested in knowing what problems were associated with keeping 70 year old aircraft airworthy. Steve said that it wasn’t a shortage of spare parts that was their biggest problem; more a shortage of skilled engineers to work on the aircraft. Flying skills for their multi-engine tail-wheel aircraft are also becoming less available.
They are re-building a Gloster Meteor aircraft, with a twin seat configuration, in order to be able to train pilots.
Having said that there’s adequate supply of spare parts, Steve went on to say that parts for their Canberra are not so easy to find. They recently lost an engine and they have been scouring the globe for a new one. They are searching for a Rolls Royce Avon type 109 engine, with paperwork. 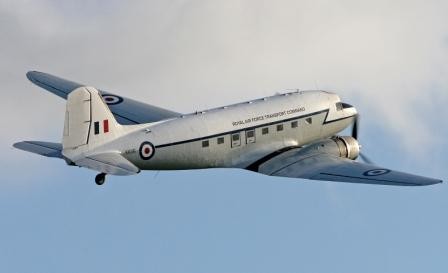 If you’d like to help support Classic Flight in some way you can, of course visit Airbase at Coventry. You could take a pleasure flight yourself or buy a voucher for someone you know.
Classic Flight Club is also available for people to make regular donations to the upkeep of the aircraft. Gold members, who currently pay Â£45 per month, can take flights in selected aircraft when seats become available. What a great idea if you have Â£45 quid a month to spare.

The aircraft that are based at Classic Flight include: 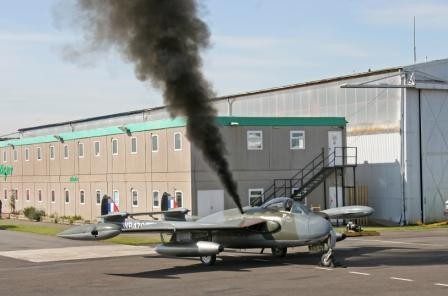 I’m definitely going to pay them a visit next year and I recommend all of you that have an interest in keeping some venerable old aircraft in flying condition to go along yourselves. Remember to check out their website for details of when they are open. The website can be found at:
www.classicflight.com