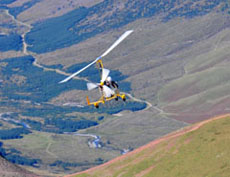 Today we’re up in the English Lake District talking gyrocopters with Andrew Lysser of Cumbria Gyroplanes. It’s been a while since we discussed the world of gyrocopters so I took this opportunity to get an update from Andrew.

We started by talking about the most recent developments in the gyrocopter market. Most notable is the recent release of the Cavalon by AutoGyro of Germany. At close to £100,000 Andrew describes it as a Porsche of the gyrocopter world. It’s a side by side model, very much like a helicopter cockpit in terms of layout. We should be able to see the Cavalon at December’s Flying Show in the UK. The introduction of these enclosed cockpit gyros, like the Cavalon, Calidus and M24 Orion, is really taking the market to a new level allowing the pilot to travel in warm, dry, comfort. Having said that, Andrew insists on training his pilots, for at least some of the time, in the open topped MTO Sport. This enables the student to get an appreciation of yaw, helped by the generous blast of wind in the face when the aircraft is not lined up correctly. Andrew suggests that these new enclosed aircraft are more of an interest to conventional pilots with the open topped craft appealing more to adrenalin junkies or motorcycle fans. 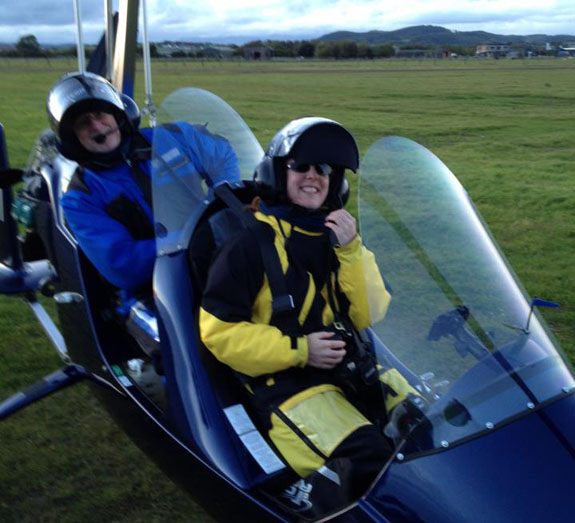 Andrew has not long since moved to Carlisle from Kirkbride. He says that the larger airport with full ATC adds an extra dimension that gives students confidence to venture further afield.
He came to gyroplanes having started out in paragliders. He likes the gyrocopter particularly because it allows you to fly on more days than most other aircraft. Its wing loading and main rotor speeds mean that it isn’t as susceptible to turbulence, cross winds or mountain rotors winds and so can be flown in most weather conditions. The gyroplane is also very suitable for flight training, and flying in general, says Andrew. Because it has a very short landing roll the gyro can be flown much lower than fixed wing aircraft, ideal for sightseeing around the Lakes or low level flights across the sands of the Solway Firth. 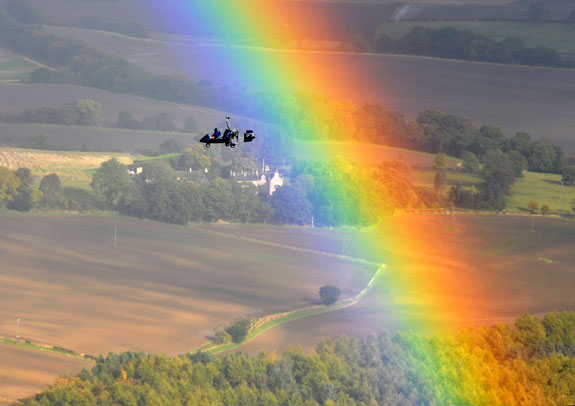 By way of a reminder I asked Andrew to confirm just how safe gyrocopters are. The modern, certified aircraft are very safe, he says, and even bird strikes on the main rotor aren’t an issue. The gyrocopter can’t stall which makes for a stable, safe aircraft and it also helps Andrew with his aerial photography. In essence the gyrocopter is in autorotation at all times and so doesn’t need to change from powered flight to autorotation after an engine failure like a helicopter.
Have a look at some of the pictures and videos on Andrew’s web site (see link below).
About 50% of the pilots coming through his doors are converting PPLs. Many students are in fact commercial pilots who just want to inject some fun back into their flying. A converting pilot will be required to do 15 hours dual and 15 hours solo, as a minimum to get their PPL(G). Heli pilots need only do 10 dual and 10 solo. There is only 1 exam required for converting PPLs. 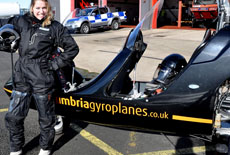 Sadly, at the moment, you aren’t allowed to rent a gyrocopter when you have your licence so you are limited to buying an aircraft or a share in one in order to go flying. This is a major issue for the industry at the moment but, as I understand, the industry body is working with the CAA to resolve it. Andrew also says that allowing gyrocopters to gain a commercial application licence would open up all sorts of opportunities for gyros. Powerline inspection, search and rescue observation, military patrols, police observer roles. The list goes on. Potentially very exciting times for the gyroplane.

Andrew thinks that the market is currently missing an entry level gyrocopter. This issue may resolve itself as the market matures and more second hand aircraft come on to the market but at the moment new aircraft are very expensive and second hand values are remaining high.

Technology advances are happening apace in the gyrocopter space. In the US  CarterCopter are developing their own vehicle and in Europe the PAL V  is an exciting concept.
So, get yourselves up to Carlisle, preferably on a sunny day, and have the flight of a lifetime across the beautiful English Lakes.
Andrew Lysser – Cumbria Gyroplanes – 07771 608767