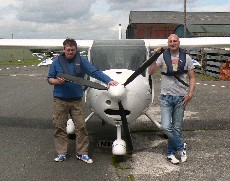 Jon and co-pilot Dave return from the Round Britain Rally

Jon Hilton is an adventurous microlight pilot, currently flying a CTSW out of Barton Airport, Manchester. Having read a couple of Jon’s reports in the BMAA’s monthly magazine he sounded like a prime candidate to appear on the Podcast.

He started out completing his PPL in the USA, in his early twenties, and went on to get his night, multi and IMC ratings. After taking a break from flying Jon came back to aviation but this time chose to fly microlights, buying a CTSW a couple of years ago. Jon lists the reasons why he flies microlights including: cost of flying, cost of maintenance, speed and endurance of the CT and also because it just feels better to fly than some of the old Cessnas and Pipers found on many airfields.

As a fair weather pilot myself I’m always considering what I’d do if the weather took a turn for the worse and I’ve had one or two exciting moments when the cloud level has dropped or I’ve flown into rain. In Jon’s reports he mentions how he has set off in conditions that would deter most pilots and so I was interested in how he made his `to go or not to go’ decisions.

Jon flew his microlight to Fredrichshaven earlier this year and the conditions were far from ideal. He found himself at 800ft over the Channel and had to land in a cross-wind that would tax even the most experienced pilots. 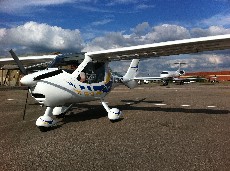 G-CGIZ on a recent trip to the Scilly Islands

He’s also flown the Round Britain Microlight Rally in what was laughingly called our British summer. Many pilots didn’t set off on the trip due to the rain and wind but John and his co-pilot braved the elements and managed to win the Silver category to boot by circumnavigating most of the UK over the course of a couple of days.
Jon’s `get on with it’ attitude certainly generates interesting aviation stories and he certainly has his share of fun times on the ground too.

It’s a fine line between pushing your own flying limits and being foolhardy, and I asked Jon what influences his decision making. With lots of experience under his belt and plenty of pre-flight preparation he continues to come out on top. Jon says that he always carries a tent and sleeping bag so he can land at an alternate airport if necessary. He’s also planning a Round the World trip at some point so being able to cope with changing weather conditions is probably a must for such an adventure.

At the end of our conversation Jon quotes Kipling’s poem, If:
If you can fill the unforgiving minute
With sixty seconds’ worth of distance run,
Yours is the Earth and everything that’s in it,
And – which is more – you’ll be a Man, my son!

Jon’s certainly filled his life with challenges and achievements. This ethos applies to his flying too. As a result he has many fascinating tales to tell and many stories for his grand-children. I sometimes wish I had Jon’s adventurous spirit but we’re all different eh? 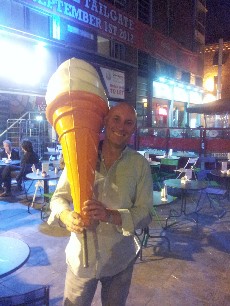 Jon on a recent trip to Dublin – he dared me not to use this!

If you needed any more evidence of Jon’s attitude to life then have a look at his charity blog.
www.justgiving.com/Jon-Hilton
There you’ll find out that Jon is attempting the World record for covering a mile on a pogo stick. Having seen Jon practice I can confirm that this will be a real challenge but I’m sure he’ll do it if he doesn’t cripple himself in the process.