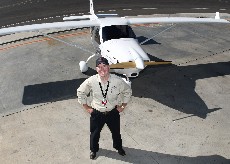 First up though, I asked Owen about his flying background. With both of his parents in the RAAF and his dad flying over 200 missions in the Korean War, it’s hardly surprising that Owen developed a love of flying from an early age. He went solo at 16 years of age and started his career in aviation as a charter pilot, flying instructor and various other posts before finding his way into the airlines; starting work with Ansett.

In 2010 his plan to fly around Australia came to fruition. He’d long been planning the trip and it coincided nicely with the 100th anniversary of powered flight in Australia, incidentally flown by Harry Houdini. Owen also wanted to promote aviation in his homeland and, at the same time, highlight its accessibility to the general public who often, like here in the UK, see it as an elitist activity. In order to make the whole project an Australian affair he decided to use the Jabiru J230, built at Bundaberg. En route, Owen would be raising funds for the RFDS, the Royal Flying Doctor Service. Here in the UK it’s hard to imagine how important a service this is for those living in the more remote places of Australia. All in all he’s raised over $10,000 for the RFDS; so a wonderful contribution to this essential service. 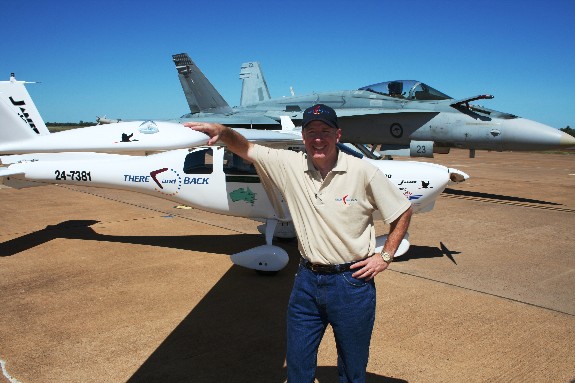 Owen with Jabiru and RAAF FA-18

Owen says that he picked the Jabiru as it was designed and built in Bundaberg, Queensland. And not only that; Bundaberg was the home town of one of Owen’s boyhood heros – Bert Hinkler. If you’ve never heard of Bert Hinkler his story is a truly fascinating one. If you have a spare moment, Google ‘Bert Hinkler’ and check out his incredible life in aviation.

The Jabiru J230D is a factory built aircraft. It shares the airframe with the 4 seat J430 but, as the 230 has only 2 seats, it has plenty of room for the baggage required for Owen’s long distance jaunt. As you can imagine, such a trip over largely uninhabited areas or indeed open-ocean, will require lots of safety gear and the Jabiru proved a capable beast for the job. As Owen says, he flew over sea, desert and fairly cold areas too but the Jabiru didn’t miss a beat. 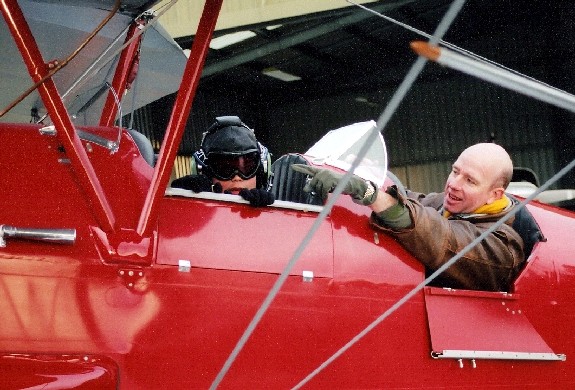 Owen in his Tiger Moth

The trip itself launched, not surprisingly, from Bundaberg. The route was anti-clockwise and took Owen over approximately 7500 nautical miles, clocking up 75 hours of flying time. Although the aircraft had an endurance of something over 5 hours, he usually confined himself to legs of 2 to 3 hours, where possible; landing at regional aerodromes, farm strips and even major international airports. In my ignorance I asked Owen whether Australia could be characterised as having population around the edge and nothing but sheep in the desert interior. In fact I wasn’t far off except that it’s mostly cattle in the out-back due to the lack of grass. I had imagined that flying over such vast areas would be quite boring but Owen reckons that there’s quite a bit of variety of landscape and that is what made the trip so incredibly beautiful for him. Listening to him describe the trip from Broome on the coast with its azure sea and white sands in to the desert area of the Pilbara made me feel very envious. Not quite like my trips to Caernarfon.

As I mentioned, Owen has turned his hand to writing. When his first airline employer, Ansett, collapsed, Owen went off to university and discovered his love of writing. Since then, and even though he didn’t stay unemployed for long, his work has often been published in aviation magazines and he’s even turned his hand to writing books. His first book, ‘Down to Earth’ is the story of a WWII fighter pilot and Owen is working on his second book at the moment. If you’d like to know more about Owen or would like to read his excellent aviation blog, you can start by going to:
http://www.owenzupp.com

Owen’s long term goal is to fly around the world one day and this trip was a great starter experience. I look forward to speaking to Owen again soon to find out what his next great aviation adventure will be.