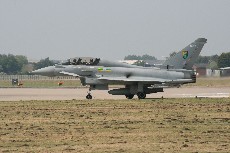 We started with Gregor inside the cockpit of an XI Sqn Eurofighter Typhoon.
They share aircraft around throughout the fleet at Coningsby but at the time of my visit, there were quite a lot of 2 seat aircraft as most of the single seat jets were deployed in Italy. As there’s so much computing power in the jet, they have to connect it to a ground power source in the hangar hence a great deal of background noise on the podcast. 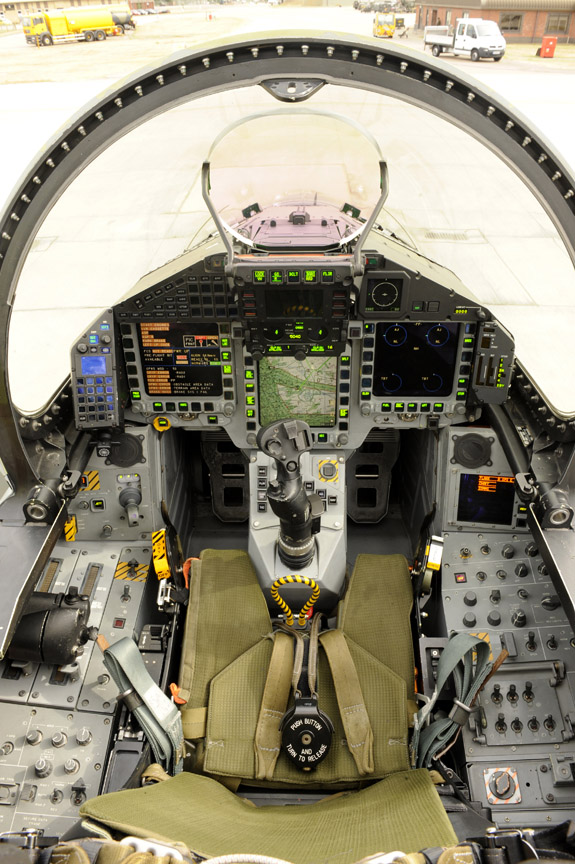 The cockpit is all glass with none of the conventional instruments that I’d recognise. In fact all of the standby instruments in this aircraft are computer driven too. Gregor gave me a sort of guided tour around each of the buttons, switches and screens starting to his left and working his way around the cockpit.

Gregor says that it’s a fairly similar layout for any fast jet cockpit nowadays. The consoles on the left and right have quite a lot of switches but generally they are turned on before flight and you leave them in their ‘on’ position for flight and turn them off when you land again. You may have to dip into some of these in certain emergencies, requiring you turn certain things off and back on but the whole cockpit is designed so that the pilot can be hands on throttle and stick, HOTAS, the whole time, looking through the head-up display but occasionally glancing at the 3 MHDD screens. ‘The advantage of that is that you are looking out for other aircraft, hills, or other things you might fly into but there are tactical implications for that as well. That’s the advantage to not having your head down doing things’, says Gregor. 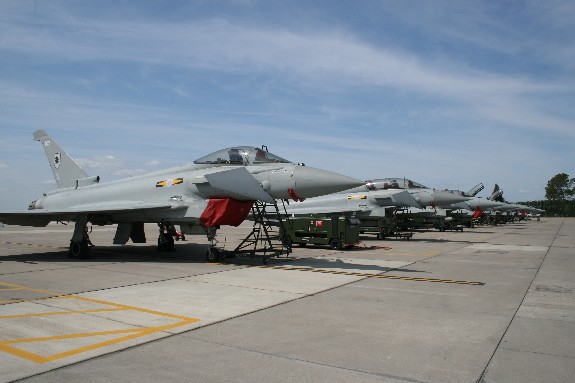 Typhoons on the apron at Coningsby

When we were discussing the throttle I asked Gregor whether, with such a powerful jet, they needed to use re-heat very often. Gregor replied that ‘certainly when they are manoeuvring at high altitude then it’ll be used as required for what ever training sortie they’re doing. For safety reasons at lower levels then, yes but because of the huge amount of noise we try and not use it at lower altitude.

Steve: It seems to perform very well without reheat.’ He went on to say that ‘max dry power is equivalent to reheat on other jets. That’s the big thing about Typhoon, its power. Everyone raves about its power. The other thing is its carefree handling.’ I asked Gregor whether it’s more like operating a computer than flying an aircraft to which he responded, ‘a lot of it is systems’ management with any fast jet particularly with the Typhoon. My experience before all of this was on the Harrier which was a very hands-on sort of aircraft and very difficult to fly in certain regimes. The Typhoon has been designed to be easy to fly and operate so all of this computer management can go on in the background. It is however very user friendly and it’s been very well designed so that although there’s a lot going on, it looks on first impressions that wow, there are buttons everywhere, there are things glowing and whirring away, that once you sort of get to grips with it it’s very user friendly.’ 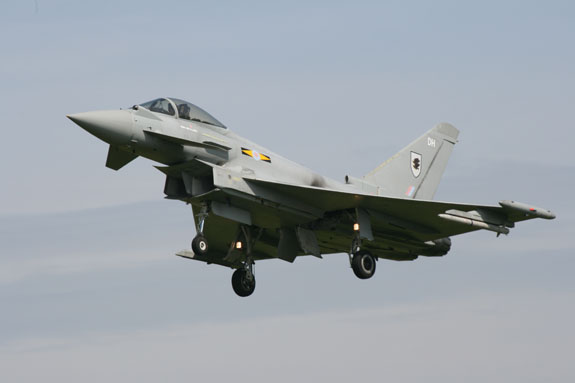 It seems that the aircraft’s computer system looks after all modes of flight and even recalculates things like weight and balance as you go. Gregor says that the aircraft is, in fact, so unstable that it is impossible to fly without the help of the computer systems. These same systems also won’t allow the pilot to exceed the aircraft’s handling limits nor depart it from controlled flight. The phrase that kept cropping up was ‘carefree handling’. Having had a long look around the cockpit controls, we talked about the ejection seat system. Gregor gave me a blow by blow account of how the seat works and what the pilot needs to do to avoid injury. The Martin Baker ejection seat is a really fascinating piece of kit and it’s well worth listening to Gregor describe how it works, millisecond by millisecond. Back down on the hangar floor, Gregor and Liam gave me a guided tour of the Eurofighter Typhoon’s exterior starting at the ‘pointy end’ under the aircraft nose. Gregor started by explaining how the 4 ADTs – air data transducers – worked and linked up with the 4 onboard computers. We then moved along to the foreplanes before having a look at the air intake cowls which automatically rotate in flight to adjust the amount of air flowing into the 20,000lb thrust engines. With a total 40,000lbs of thrust that’s being generated by the engines but with a very light aircraft you get a thrust ratio of greater than 1:1, so as Gregor says ‘it goes and goes and goes.’

Liam and Gregor showed me the 13 hard points on the aircraft and ran through the weaponry options on the Typhoon. The 27mm cannon was particularly impressive.
I asked the team where they did their weapons training from Coningsby. Gregor told me that the majority of the sorties are done in danger areas over the North Sea which are only a few minutes flying time from the base in Lincolnshire.

When we got round to the back of the aircraft and discussing the divergent nozzles on the engines’ rear, Liam described a flight in the Typhoon as like the best roller-coaster ride he’d ever had and they both agreed that any pilot that’s ever flown the Typhoon raves about the amount of performance. ‘It will accelerate from about 200kts to the speed of sound in approximately 30 seconds at low level.’ Claimed Gregor. He went on saying that, ‘it will climb supersonically to about 40,000 feet in around 2 minutes. So that’s higher than your normal airliner will fly at. And to think that it takes them about 10-15 minutes to get to that sort of height. We can be up there in a couple of minutes.’

I’d heard that the pilots have a problem descending in the aircraft without going through the sound barrier.
Gregor confirmed that, ‘Because it is so aerodynamic, if you just put the nose down, even at idle, it will continue to accelerate. He went on to describe the 3 ways in which they try to loose height. ‘One is you do it early and you do a very gentle descent so you don’t end up having to put the nose down too far. If, for air traffic reasons you can’t get descent, you can either do a sort of split S manoeuvre where you go to idle, you roll inverted and you do sort of half a loop and that will lose you 4-5000ft and you’ll just keep doing that and the final way, which is alien to most pilots because it involves putting in pro-spin controls. Now as we said when we were in the cockpit the jet physically won’t allow you to depart it when you put full pro-spin controls in. So stick back in one of the corners and full rudder in, the jet just enters a very graceful, tight spiral at about 70 or 80 degrees nose-down and it will do that at quite low speed and you will lose several thousand feet very quickly.’

It was a real treat to be able to have a close up tour of the Eurofighter Typhoon. If you’d like to see the jet close up and maybe see the display team in action have a look at the team’s web site. Hopefully they’ll be back in action for the 2012 display season.