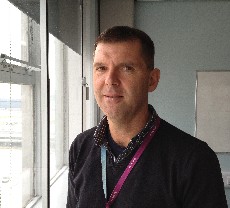 Today I’m down at Manchester International Airport to interview Chris Walsh one of the Air Traffic Control Officers working in the tower there. Following on from my chat with FISO, Mark at Barton, I’ve been asked by many listeners for a podcast featuring a fully fledged ATCO. So here it is.

I was accompanied on my trip by fellow Barton aviator, Duncan, who also appeared on episode 50 of Flying Podcast. Chris, very generously, gave up a couple of hours of his free time to give us a guided tour of the tower and then settled into one of their meeting rooms, overlooking the apron, to answer all of our ‘ATCO’ type questions.

To set the scene for our listeners I first asked Chris about the airport itself.
The airport sits within class D airspace at ground level and then class A above 3500′. It is one of the busiest airports in the UK, currently handling approx 18m pax per year. In terms of movements, as far as the air traffic controllers are concerned, they handle 500-600 aircraft a day with a maximum of 50-60 take-offs and landing per hour at the busiest times.
The Approach Control Unit protects airspace out to about 40 miles on their radar.
Typically and inbound airline will contact the airport at 30-40 miles out as they descend below 10,000′, approaching one of their holding points. 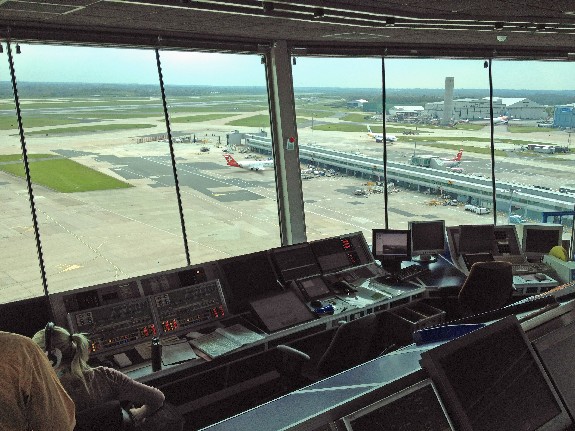 For a departure, the sequence is for an aircraft to contact the Ground Movement Planner who will issue the pilot with a clearance, a squawk, any applicable route restrictions, standard instrument departure details and the departure slot. Once the aircraft is ready for pushback, the pilot will request ‘start’ and the GMP controller will pass the pilot to the Ground Movement Controller who will issue clearances for the aircraft to move out on to the taxiways. Control is then handed to an Air Controller who controls the runway and is able to issue take off clearances. Once airborne, and through approx 3000′, control is handed to an Area Controller based up at Prestwick in Scotland. Chris goes on to describe how an aircraft could end up talking to 15 controllers before he lands and parks up on a stand at an airport such as Heathrow in London. 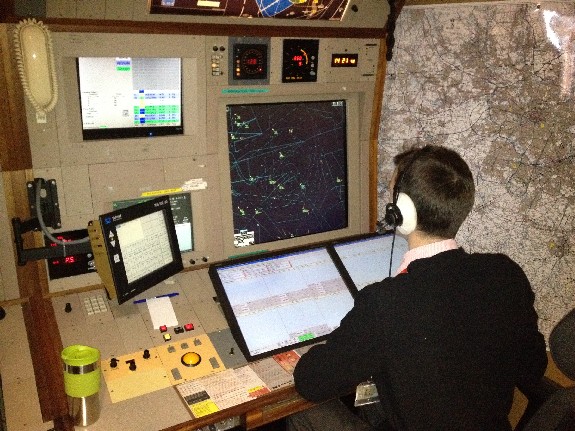 We’d watched the Airbus A380 taxi out and take off earlier whilst we were up in the control tower and Chris explained how the aircraft’s size can present certain challenges due to its size. Not only does its wake turbulence cause issues fro following aircraft but the size of the aircraft can also interfere with the ILS beam on the runway. That’s why there has to be such a large gap between landing aircraft when the A380 takes off.

I asked Chris whether they still used the flight progress strips in the tower to control aircraft movements. He explained that they had just recently moved over to a computer based system whereby the strip now appears on a PC screen. Although there’s slightly more work involved in inputting the aircraft details into the system, it’s then much easier to hand aircraft on to colleagues and more personnel on the airfield can be made aware of aircraft status at the press of a button. 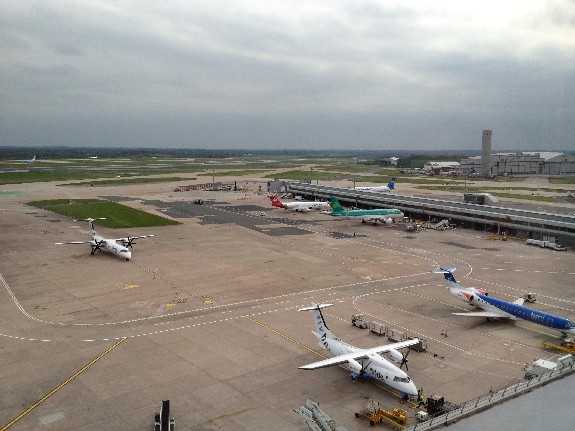 Apron with new tower in background

The air traffic controllers at the airport will soon be relocating to a new tower based away from the main terminal building. Although they’ll be keeping the old tower as a back-up, they’ll be moving over to the new tower in 2013.

After hearing about the airport I then went on to ask Chris about his role as an air traffic controller at Manchester International Airport.
Chris, and the rest of the 50 strong team of controllers at Manchester, actually works for NATS, the national air traffic control company who run the main control centres for UK airspace.
There are 5 watches working a 10 day cycle at the airport. The sequence is to work 2 days on the morning watch, 2 afternoons, 2 nights and then they get 4 days off. During a shift, each controller can expect to work a maximum of 2hrs before taking at least a half hour break. 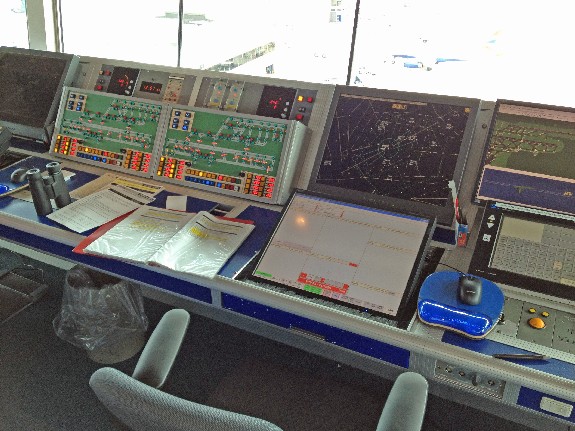 ATCO position in the tower

Chris says that the busiest times, like the early morning, can be quite stressful but that the stress is controlled. It’s only when something untoward happens, like an aircraft go-around or the weather is very poor, that things can get a bit more difficult. To cope with extremes in weather, such as fog, the airport will actually reduce the number of movements to keep things safe.

Chris explained that the NATS web site has all of the relevant details for people considering a job as an ATCO.

Chris has been an ATCO for 25 years and he gave us an quick outline of his career and also mentioned what had changed during his time in the tower.
He does fly GA aircraft himself so he is very aware of ATC’s relationship with light aircraft pilots.
We were keen to find out what the ATCOs think of GA pilots operating near the airport. Since the last flying school left Manchester Airport some years ago there are very few GA movements into or out of the airport and the ATCOs don’t seem to be too keen on letting small aircraft enter their airspace. It’s understandable that they don’t really want us light aircraft pilots taking to them when they’re busy but Chris says that if you have a problem or are ‘temporarily unaware of your position’ you should call them up. The ATCOs do also have an agreement with Barton that students on their first cross country down the low-level route, between Manchester and Liverpool’s airspace, should call Manchester, just to let them know they’re there.
There are special rules in place for aircraft flying up and down the low-level route and Manchester would prefer pilots not to talk to them. As it stands at the moment pilots should squawk 7366 and listen out on 118.575 Mhz. See the City Airport web site for the latest info on this!

Although Manchester’s controllers are understandably not keen to talk to light aircraft pilots they are happy to try and help pilots fly safely and to keep clear of controlled airspace. To this end they do go out to local GA airfields, such as Barton, to talk to the pilots about airspace rules.
The airport does allow a few visits to the tower each year but only organized via local GA airports. There’s also a ‘Visit an ATC Day’, organized by Airspace & Safety Initiative. Details can be found on their website:

Leave a Reply to taxi to manchester airport Cancel reply