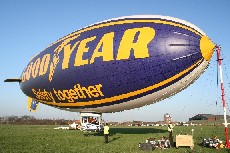 Today’s Flying Podcast finds me sat on the deck outside of Melvin’s Cafe at Barton Aerodrome.
It was a typically beautiful Spring evening in Manchester, the sun was just beginning to set and the Goodyear Blimp was about to depart. They were off to film a football match from overhead for Sky TV at the Etihad Stadium.
I took the opportunity to grab a few minutes with Chief Pilot Mark Finney before he saw the airship off on its flight.
Although it started out as a quiet night it soon got noisy with the police helicopter arriving and then, believe it or not, an Army Apache helicopter too which never happens at Barton.

My first question for Mark was ‘how did you get into flying blimps?’.
Mark says that he only took the job on a temporary basis until he found a more conventional commercial flying role but that was 12 years and he’s still flying blimps today!
Mark has a UK CPL (AS) and also a US airship commercial licence. He spends much of the year on the road, and has flown blimps in many countries around the world. ‘You must enjoy travel’ says Mark, if you’re going to be an airship pilot. 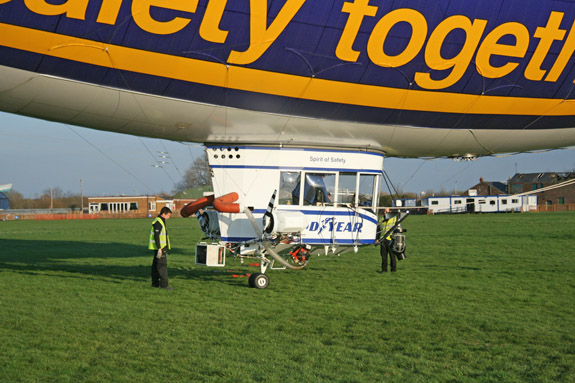 Gondola of Goodyear blimp at Barton

Blimps are actually airships but, as Mark explained, there are several types of airship. There are rigid airships, like the early Zeppelins or the English R101, which have a rigid skeleton holding the envelope in shape. There are semi-rigid airships, like the newer Zeppelin NTs, which have an internal structure but also rely on the gas bag to maintain the balloon’s structure too. And lastly there are blimps which don’t have any internal structure and rely solely on the pressure of the gas inside to keep the blimp’s shape.
In the Goodyear blimp there are helium filled gas bags and also air filled bags. The air bags, or ballonets, are pressurised and de-pressurised in order to keep the ship under pressure. In this way they should never have to vent the valuable helium as it expands when warmed during the day. 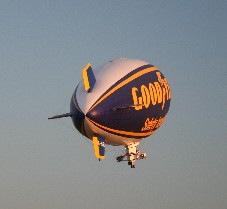 Goodyear blimp taking off from Barton

A typical flight will firstly involve planning. A blimp is very susceptible to weather and can only be flown in relatively calm weather under VFR conditions. Thunder storms and snow, for example, are two things that a blimp pilot must avoid at all costs. The other key element that requires a great deal of thought before flight is the weight. The blimp is flown slightly heavier than neutral so it will sink if all engines fail. The team also have to take into consideration the cooling or heating of the gas during the flight and hence the altered lifting capacity of the envelope and they also have to consider the reduced weight of fuel during the flight. Prior to each flight the ground crew will load lead ballast to get the weight exactly right. The pilot can, of course, drop ballast during the flight to increase lift.
Normally the crew fly the Goodyear blimp at between 1000 and 1500 feet and, on a transit at between 25 and 30 knots.
In the event of an emergency such as the loss of both engines, the captain will jettison ballast until the blimp is descending gently and then look for somewhere to land like a balloon.
This particular blimp has 2 x Limbach, 68hp engines with fixed pitch, 2 bladed propellers. Modern blimps have the more economical and more powerful Rotax 912 engines which also have a reverse mode making landing much more controllable.

For the A60 Plus blimp, like the Goodyear UK’s blimp, they have a total of 13 crew. They have so many because the airship has to be manned 24 hours a day. Mark says that this is the Achilles heel of airships making them very costly to run. They have high manpower costs including 9 hotel rooms per night whilst the team is on the road.

I had noticed that the blimp had had to divert on its way up to Manchester a few days earlier. They had encountered some thunder storms and had diverted to Wolverhampton. One problem with this is that the crew have to arrive well before the blimp. So, wherever the blimp wants to land, the crew will have to have arrived some time before and set up the mooring mast. All very laborious. The same issue arises if the ship has a good tail wind on its journey. This will mean it can arrive well before the ground crew. Again, not good. 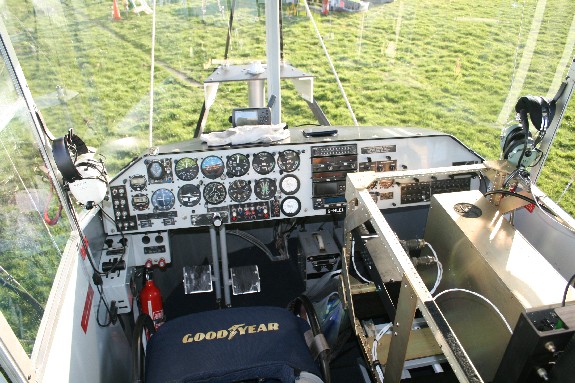 Inside ‘Spirit of Safety’s’ gondola

I next asked Mark about the controls that they have on board the blimp and how they differ from a GA aircraft. He says that, as they don’t have ailerons, they don’t have a joy stick, as such, but rather they have a large wheel to control the pitch. They do have conventional foot rudders as per a GA aircraft and most of the instruments are the same. They just have a few more dials to show the gas pressure inside the envelope.

The gondola on this blimp is fairly small and only has capacity for pilot and a maximum of 4 passengers but they usually only carry 2 passengers on normal operations. For tonight’s flight the blimp had a hi-def, gyro stabilised TV camera mounted at the front of the gondola and carried the control hardware inside.
This sort of flying, filming sporting events from overhead, is their bread and butter work, according to Mark, and is what they do best.

I asked Mark what he thought of the future for lighter than air craft. He said that the Goodyear airship was in a niche market and in order to expand the use of airships the amount of labour would have to be reduced. He did, however, think that there was an exciting future in such aircraft as the Hybrid Air Vehicles being developed in the UK at the moment.

After our chat outside the cafe we wandered over to the aircraft to take a closer look at the envelope and inside the gondola. As Mark mentioned the gondola is pressurised by pumping air in to the balonets and this is done with a small, but noisy, engine mounted on the back of the gondola, hence the racket in the background sounding like someone mowing the lawn nearby. As we approached the blimp, which is tethered by its nose to a mooring mast, it was wafting around in the breeze a couple of feet in the air. According to Mark, the mast can hold the blimp firm in winds of up to 80 knots and it would not be unusual for the blimp to stand on its nose in turbulent winds.

In order to climb inside the blimp it was just a matter of pushing down on the gondola until the steps came within reach. Inside, it’s fair to say that it’s very utilitarian and not an executive aircraft interior by any means.

Mark, himself, has covered most of the world’s top sporting events, in the blimp, but says that the most rewarding work was in Kosovo where he was involved in mine clearance with ground penetrating radar.

If you wanted to follow in Mark’s footsteps, the company do prefer helicopter or fixed wing experience. If you have a commercial licence, so much the better but, as Mark says, you MUST love to travel. You will be trained up to fly the blimp, probably getting you an FAA blimp licence first and then getting a conversion to a UK licence thereafter. Because of this investment, by the company, they do insist on you being tied in for 3 or 4 years.

As the aircraft was positioned for take off by the ground crew, I asked mark about how the aircraft was landed. Basically, as the ship has no brakes, it’s flown in on one engine with the other one stopped and acting as an air-brake. It’s then up to the 8 ground crew to catch hold of the trailing ropes and then the gondola itself before steadying the ship and manoeuvring it on to its mast. The art of landing is in the air-speed. A happy medium is required that gives enough speed for controllability via the control surfaces and slow enough that the crew can restrain the ship.

The Spirit of Safety will be seen in the UK this year and they will be finishing their tour filming the 2012 Olympics in London for NBC.

I’d always thought that it would be one of the best flying jobs around, being an airship pilot but I hadn’t really thought about the fact that they spend much of the year, from spring to autumn, out on the road. It seems that all but one of the crew is single. So, if you’ve got no ties, fancy a job cruising around the skies in nice weather and are prepared to sign up for several years then maybe a blimp pilot is for you.

For more information about Mark and the crew of the Goodyear blimp ‘Spirit of Safety’ – G-HLEL – you can find them at: