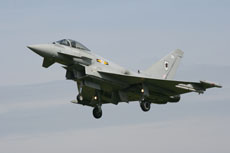 Liam started by quoting the base’s mission statement which is: ‘To Develop the future, deliver the present and commemorate the past of the Royal Air Force’s combat air power’.
The aircraft are based here include the Typhoon and the Tornado and the Battle of Britain Memorial Flight aircraft including the Lancaster, Spitfire, Hurricane and Dakota. 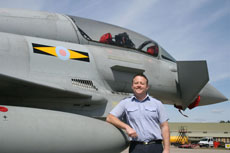 I asked Liam to give me a brief overview of Coningsby’s history as I knew that it did indeed have an illustrious past. He described how it started in March 1941 and saw 617 ‘Dambusters’ squadron based here during the war – 30 Aug 1943 – Jan 1944. From then the base hosted Vulcan nuclear bombers, Phantoms, Tornados and now, obviously the Typhoons. It had been slated to be the TSR2 base but that didn’t happen as the project was cancelled.

The future of the base mainly features the Typhoon but with the Tornados still based here.

My next set of questions concerned the Typhoon display team. I was keen to find out whether or not the team would be displaying this year what with all of the operational requirements being placed on the Typhoon and our front line pilots but firstly, I asked Liam why the RAF display the Typhoon in particular.

Liam said that the RAF wanted to demonstrate that their pilots and engineers were amongst the best in the world and that the Typhoon was ‘money well spent’. 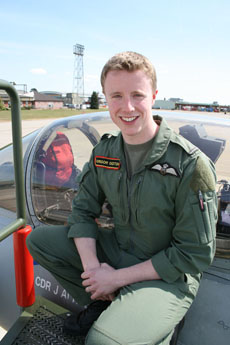 As Gregor is destined to be a Typhoon pilot, I took the opportunity to find out how you go about getting selected to be the Typhoon display pilot.
Gregor said that it was a huge honour to be selected to be the display pilot and he described the selection process saying that not only your flying skills but also your character are taken into account. As he is still at the training stage he’d have to serve his time on the front line, flying Typhoons, before even being considered for the role as display pilot.

Liam talked about the team that is behind the Typhoon display programme. There is Tim Clement, the display pilot, a back-up pilot who flies the spare aircraft, 5 engineers spanning all trades, engineering officer and computer systems team.

Gregor went on to describe how they put the display together and how the actual display flying training progresses. As display manager, Gregor helps Tim, the pilot put the routine together before the season. Tim starts the training at 5000′, initially, eventually bringing that down in stages to 250′ which is the display minimum. I then asked about the max amount of G that you would pull during a display and what’s the most demanding manoeuvre that they fly. Gregor stated that Tim would fly a max +9G and -3G, which are right on the aeroplane’s limits, during their ‘roller-coater’ manouevre. The most demanding part of the routine he says is the slow speed loop which is done at low level, with full re-heat and is a great crowd pleaser.

When I asked what makes the Typhoon a particularly good display aircraft, Gregor said that it’s the aircraft’s power, agility and power that make it such a great display spectacle. ‘It’s one of the few aircraft that you can actually see accelerate’, he says.

As he’s in charge of the logistics for the airshow season, Liam told me how the team prepare for an airshow. The main jet and the spare jet are flown to the airshow and the engineering team will usually go by road. During 2010 Liam says that they did 26 airshows but this year, what with front line operational requirements, they will be much more restricted. They are currently aiming to do 16 shows but that is very much to be confirmed. As at date of publication the show season is suspended but they hope to get the show ‘back on the road’ soon. Even without the aircraft, however, the team plan to be at all of their planned shows.
Check out the RAF Typhoon display team web site for updates.

My next question for Gregor concerned how you get to be a Typhoon pilot and I asked him to give me details of his flying career to date. He personally has been fast-tracked through the system from when he entered the RAF after leaving school at 18. He has flown the Grob Tutor during ab-initio training before moving on to Tucanos at Linton-on-Ouse and then to fast jet training on the Hawk at RAF Valley. Once selected for Typhoon, he eventually ended up here at Coningsy where he’ll spend 4-5 months with 29 Squadron Operational Conversion Unit prior to front-line ops.
Training on the Typhoon includes several hours on the simulator learning your checks and then a few dual trips learning basic aeroplane handling. The pilot then quickly progresses on to solo flight, formation flying and instrument flying before being considered a competent pilot. 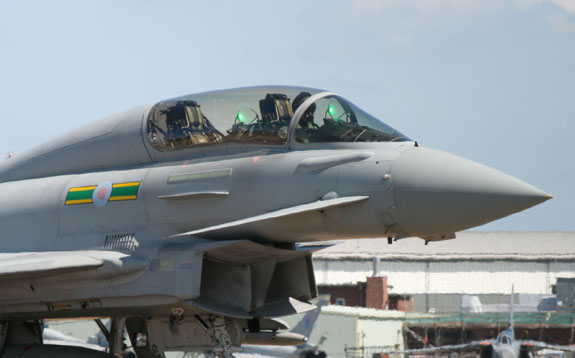 I knew that Gregor would find it difficult to answer my next question but I asked it anyway – He obviously has what it takes to fly Typhoon but what exactly do they look for in a potential Typhoon pilot? Gregor says that it’s not just flying ability that matters; you need to recognise air defence pictures and, more recently, attack profiles. The main attributes that they look for is to be able to handle multiple inputs during operations and at the same time fly safely. There is a huge amount of information that is being absorbed by the jet and the pilot, in turn, needs to be able to take all of the data on board. 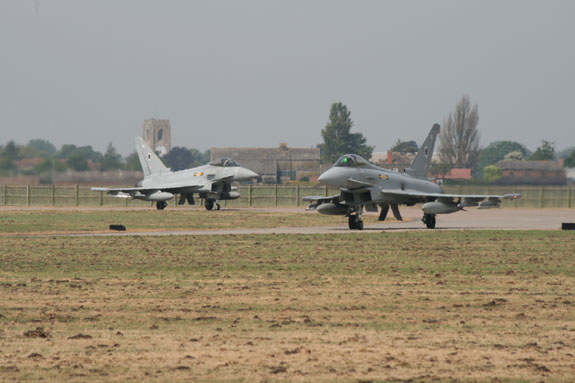 Not forgetting Liam, I asked him how he’d come to be working as Typhoon display engineer manager and whether, given his time all over again, would he join up in the RAF. You’ll have to listen to the podcast for the answer. He certainly has had a fascinating and varied career the highlight of which was meeting Barack Obama closely followed by learning to drive a tank and getting to drive it into a McDonald’s on the A1!