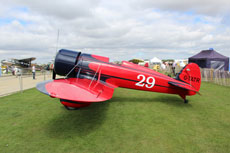 The LAA Rally has come round again. Very often we’re scouting round looking for something really exciting to talk about on the UK airshow/rally scene. Luckily, this time the CAA has helped us out albeit at the very light end of the light aviation market. Over the coming weeks they’ll be consulting on a proposal to deregulate the single seat microlight market. So, if your new aircraft weighs in at less than 300kg (MAUW) and has only one seat, you’re away!

There will be no need for any form of inspection or permit to fly. I’m not sure I’d trust myself to build such a thing and fly it without an expert give it the once over but many aviators at this end of the sport are keen to avoid any form of bureaucracy and cost. So, overall it’s probably a good thing if it does come to pass and that does seem very likely. There are some exciting aircraft about which are currently classed as SSDR (Single Seat Deregulated) and which have been struggling with a very restrictive 115kg empty weight. When this limit disappears many of these aircraft will in fact be able to built to a safer standard by adding such luxuries as effective brakes. 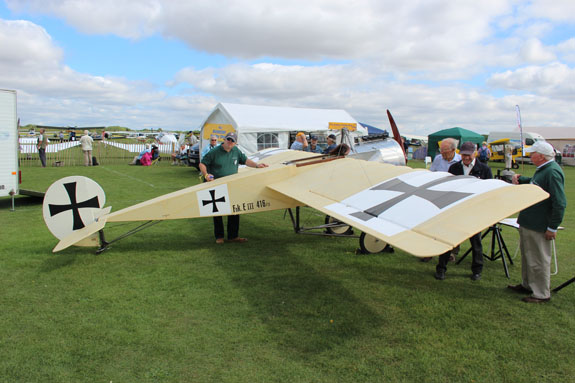 One such exciting aircraft at the LAA Rally this year is the Fokker Eindecker from Grass Strip Aviation. I had a chat with Robin Morton about the current SSDR ¾ scale Eindecker and how the new legislation would affect them.

Robin was very excited as it meant they would be able to bring in many more WW1 replica ¾ scale models from their US supplier Airdrome Aeroplanes. If the sub-300kg category deregulation does come about then they’ll be able to offer a Fokker D-VI and Triplane, Morane Saulnier Parasol, Bleriot XI and quite a few more. 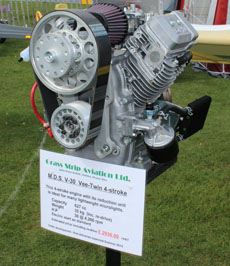 Also on the GSAL stand was their prototype V-twin, Briggs & Stratton, 4 stroke engine. They have been developing this engine to power their own aeroplanes and to supply to market in general.

Their engine designer George Simoni is confident he’ll be able to get 30HP out of the motor. Apparently 4 stroke is the way to go as it makes it easier for pilots to refuel when they land away from their own airport. We’ll catch up with George and Grass Strip Aviation at next year’s Popham for an update.

The Zigolo motor glider SSDR made a bit of a splash at Friedrichshaven this year and the UK agent, Sprite Aviation had one on their stand at this year’s LAA Rally, Sywell. Still under construction, the aircraft was still wingless but MD Graham Smith reckons he’ll be able to complete the build in a total of just 3 weeks. He pointed out that all parts are individually engraved with part numbers and most are anodized post-production. Graham says he’s looking forward to getting this kit into the air over the next few weeks as it promises to provide some fun flying and soaring at a very low cost. 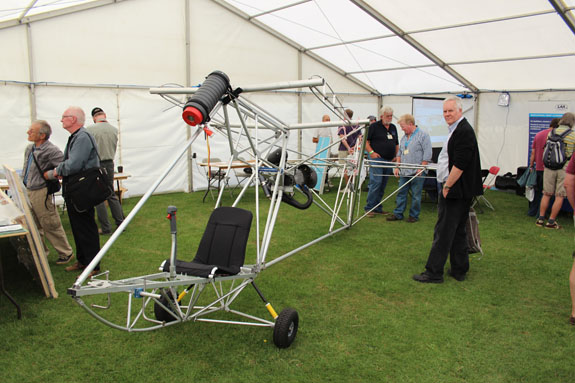 Sprite had the impressive Groppo Trail on display. This aircraft really does look the part of you fancy being a bush pilot. Currently only available as a tandem seat model but there is a side by side model coming soon and Graham thinks that this might be a candidate for building as a microlight version if he can shave the weight to below 450kg. 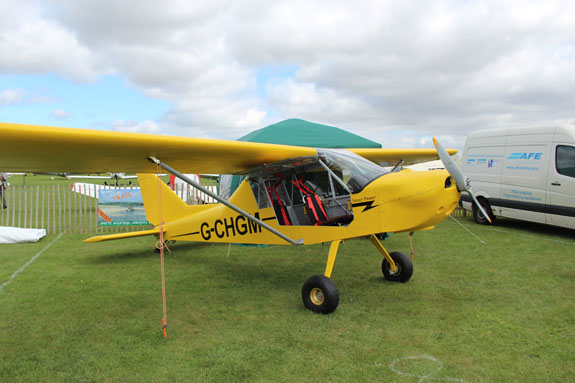 Red-air had the successful C42 Ikarus microlight on display but in glider tug guise. And being type approved, this factory built aircraft can now be used as a full sized, 650kg glider tow and when not required for that purpose can be rented out or used for microlight training. It’s what Malcolm calls a ‘multi-role aircraft’. The finer pitch prop setting on this version has meant that the aircraft, with one-up and half fuel, climbs like a rocket according to Malcolm. 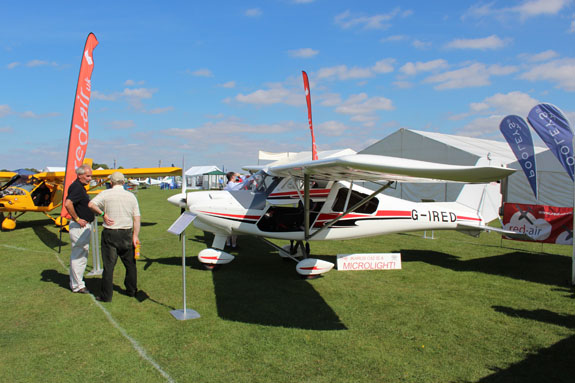 I’ve long admired the Foxbat and today I had the chance to have an up-close look at one.
Ray Everitt of Dragon Aviation had the Super Sport LSA version on display and it did look very nice. So much glazing to the cockpit makes for superb visibility. And, as the doors are slightly ‘bubbled’ you can actually see straight down I’m told. Ray says that Aeroprakt have now upped their production levels so you’ll only have to wait 6-8 weeks for delivery. All Foxbats come with the 100hp Rotax 912S engine and a choice of 3 props. Short field performance is reported to be really impressive. 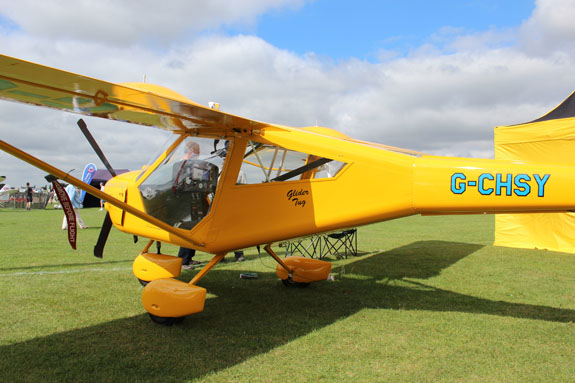 The Light Aircraft Company, based out in the wonderfully named Little Snoring, Norfolk, were busy showing the Sherwood Ranger and the company’s MD, Paul Hendry-Smith was demonstrating their Oratex aircraft covering material on a separate stand. Recently it had been reported that TLAC had bought the rights to the Escapade 2 aircraft to add to their offering so I asked Paul what this new addition brought to the company. He said that they believed the Escapade could be much more successful even though there were already 34 aircraft on the UK register. They had been meeting with many current owners and they will be taking on-board many recommendations over the coming months. As with the Ranger, the Escapade will be built at their factory in Norfolk.

More big news. A brand new all UK certified GA aircraft. It’s not often that one of these appears and this one does look very impressive. Swift aviation, building on their links with Slingsby and Europa have designed an all new aircraft, the Swift. As you can see from the photo it does have something of the Firefly about it and possibly a little Spitfire in the wing there.

With a kit plane off the blocks first the company then plans to bring a certified aircraft to the market with full aerobatic capabilities. Engine options will start with Rotax 912 moving up to ‘a full power-house 260HP powerplant’ according to designer Paul Burton.
Paul says that their market could be in schools but also in military training with interest having been shown from both home and oversees forces. Planned date for release is towards the end of 2014.

There was a diverse range of aircraft flying into the LAA Rally over the weekend including all types of home-built aircraft. What many were looking forward to was the arrival, on Friday, of the Mystery Ship and the ¾ scale Mosquito.
The beautiful Mystery Ship, a stunning replica of a 1920s Travel Air single seat racer was indeed worth waiting for.
The impressive 3/4 scale Mosquito replica was flown in from France by a pilot with an equally impressive moustache. The aeroplane was seldom without a crowd of admiring onlookers for the show’s duration. 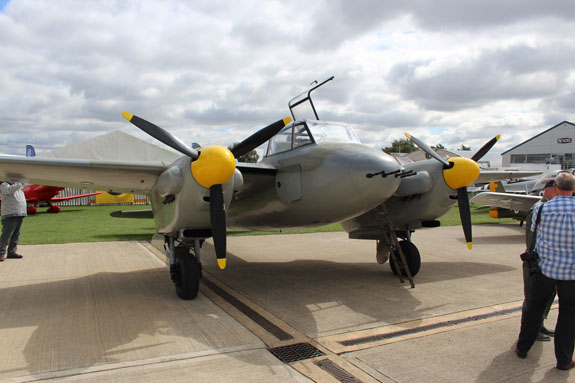 It has been a great year for aviation due to our prolonged summer and this coupled with a slightly brighter economy seems to have lifted everyone’s mood at this year’s LAA Rally… at least a touch.